The French took over Vietnam as early as 1859, the French has influenced different aspects of who Vietnam and the Vietnamese are today, so much has been integrated into their own culture and country.  The easiest forms we see is the wide tree lined streets, monumental buildings, the Hoan

Kiem Lake we see today; are all legacies left by the French, but there is much much more when we scratch the surface.  Architectural features and design reflecting French style are not only in the older buildings but also the new builds.

This elegant European looking building in Hanoi is now the home of an Ambassador (2010) to Vietnam. 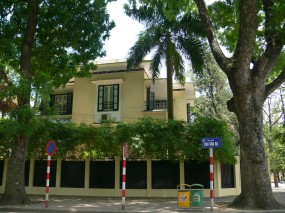 Stunning home on Pho Chu Van An in Hanoi 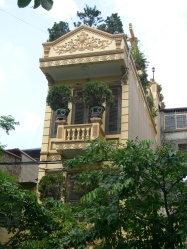 Decorative Frontage on house in Hanoi.

As Hanoi was originally a swampy area, catching malaria was a serious health risk to the new comers.  Also the French liked things more organized, they were used to Paris so wanted something similar to home, over time huge improvements were made to the city.  Of course at a huge cost as the local Vietnamese who got evicted from their homes and important sites were destroyed.

From 1886 the French Colonial Administration contained and defined Hoan Kiem Lake, cleared the whole area surrounding the lake, the mini lakes in the surrounding areas got filled in, drainage systems put in place, large open roads were built for easy access by horse and carriage, trees and gardens were planted and large governmental buildings were built as part of their planned city.

Quoc Nu was instigated by the French; this Romanized script is what Vietnamese use today.  It was developed by the French and is said to have had the greatest impact on modernization.  I am sure there must have been resistance to learning a new writing style to conform to the foreign controllers; but this became the common language in official documents and was taught at schools from the early 1900’s.

The advantages to the Vietnamese is it was easier to learn, illiteracy had been common due to complexities of the Chinese language in the written form.  This new way opened the door to a more educated society and a greater awareness to European cultures, philosophy, political ideals etc.

I am always amazed when older men in their 70’s ask me in French, if I speak French.  In 1903 a compulsory test was given to all boys and girls before they attended school.  Young French-educated Vietnamese not only spoke French fluently but were also exposed to Western ideals, ways of thinking and a completely different life style. 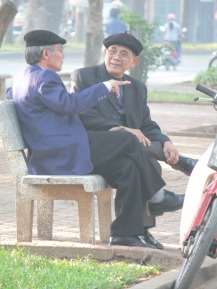 In restaurants it is still common to see the menu is 2 or 3 different languages (French, Vietnamese and English).

French bread, croissants, and delicious cakes all are famous in Hanoi, have their origins from the French.  As well as cold meat cuts.