A few mysteries exist of his parents, but at the age of 3 he was taken back to the Pagoda from where he was born and adopted by a superior monk Ly Khanh Van.

Later he became a monk and when the opportunity existed to replace the last King who was killed by this people.  Ly Thai To was put in the position as King and remained that way as had no opposition from the people. 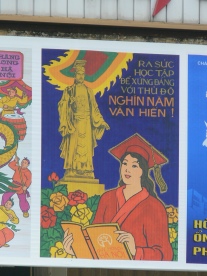 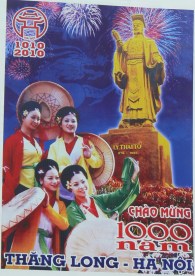 A Buddhist by religion and heart, he was a spiritual man; who also went to war for his country.

At the age of 54 he died and was buried Tha Long.

As you can imagine, it is a bit tricky to get actual photographs of him, but I can offer evidence of his legacy.  This whole book is dedicated to him as without his actions we would not be celebrating Hanoi today in 2010.

Currently the most prominent statue of him is in the Ly Thai To Park (Vườn hoa Lý Thái Tổ), fronts onto Đinh Tiên Hoàng Road, across from Hoan Kiem Lake.

This is a well utilized park day and night so he has an entertaining life watching what his people are up to today. 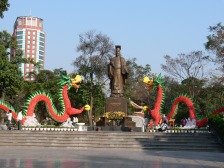 During the day from 5am Ly Thai To gets to watch Vietnamese go about their daily life, early morning Thai Chi, aerobics, pray to him, play sports, practice ball room dancing, badminton, footy, hacky sack, badminton, roller skates etc.  Then the day heats up and the constant action of people, traffic and tooting.  At night his park is full again with tiny kids, children, teenagers doing Hip Hop dance, and even some outside performances in his honor.